Peckham Industries Puts “Boots On The Ground” at AGC Rally! 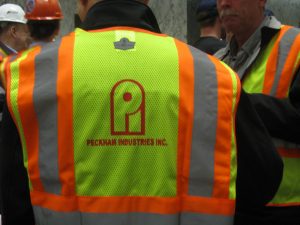 Many Peckham Industries, Inc. employees traveled to Albany on March 21st to the Associated General Contractors of New York State “Rally for Transportation Parity”. This well-attended event brought over 1000 construction workers to the NYS Capitol to lobby for increased spending on upstate roads and bridges. Our group added to the call for “Boots on the Ground”, literally.  The “Well” under the Legislative Chambers was filled with orange hard hats, vests and boots as workers from across the state joined together from all trades to fight for money to be allocated for much needed repairs.

This latest rally followed on the heels of an earlier visit in March by hundreds of city, town, county and village officials joining with industry to increase local CHIP’s funding. With budget caps and increasing costs of mandates on local government, CHIP’s remains the most reliable mechanism for the funding of repairs to local roads and bridges. We stand with our customers and industry partners in the fight for increased infrastructure spending.